Hello my name is Mrs Squelch and l run the Yr5 and Yr6 gardening group on two afternoons a week. We are lucky at Ashleigh to have such a wonderful resource which is a place to nurture and help children to develop to their full potential.

The garden started to be developed in 2008 and is now well established providing a variety of fruit and vegetables for the children and the school kitchen.

The children in the garden groups learn about planting seeds,  pricking out, planting, composting, weeding and how to use tools safely and develop lots of 'life skills'.

This enables me to take a full class into the garden and organise special events with the gardening group acting as mentors passing their skills and knowledge onto the younger children.

I hope you enjoy looking at how we use our garden throughout the year.

The children in the gardening group collected flowers and seedheads from the garden and used oasis to create the pumpkin arrangements.

As you can see the children were fully immersed in the activity and felt very proud of the end result.

Get Your Grown-ups Gardening

We had a funfilled afternoon in garden even though it was wet.

The Year 5 and 6 gardening group acted as mentors to the Reception Class children sharing the skills they have learnt in the garden. They were amazing!

The children learnt how to plant daffodil bulbs,  peas and broad beans, they went on a Bug Hunt, investigated pumpkins, collected leaves and conkers and had lots of fun! 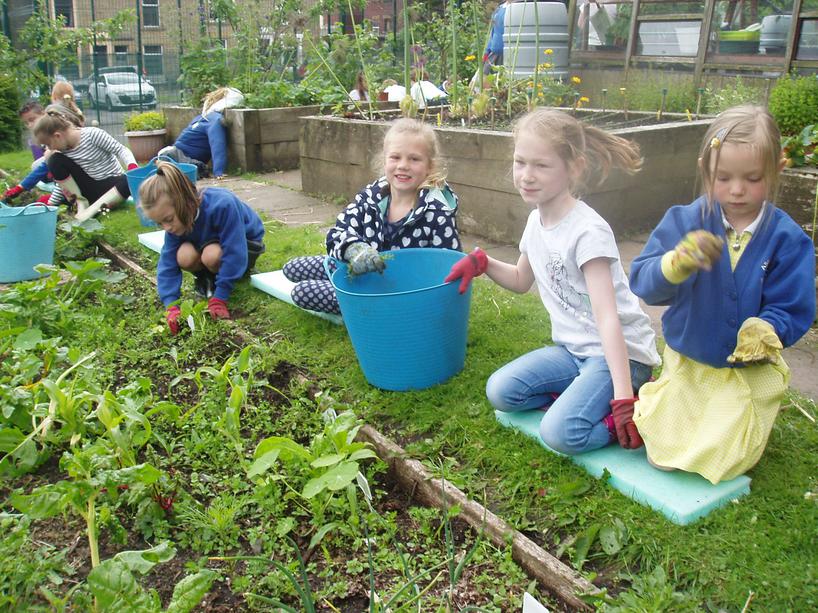 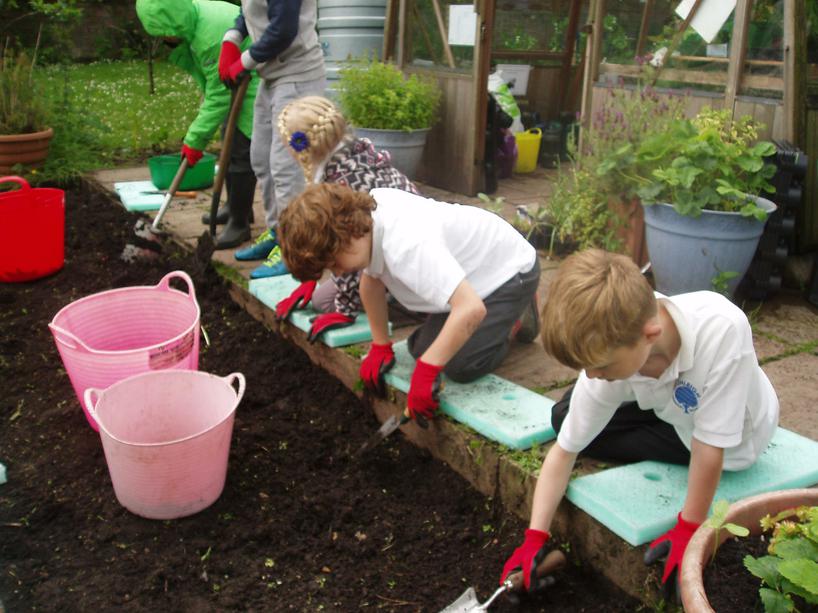 June 2016
Year 3 had a wonderful time in the garden. They managed to get lots of weeding and digging done in the vegetable plots before the heavy rain came. 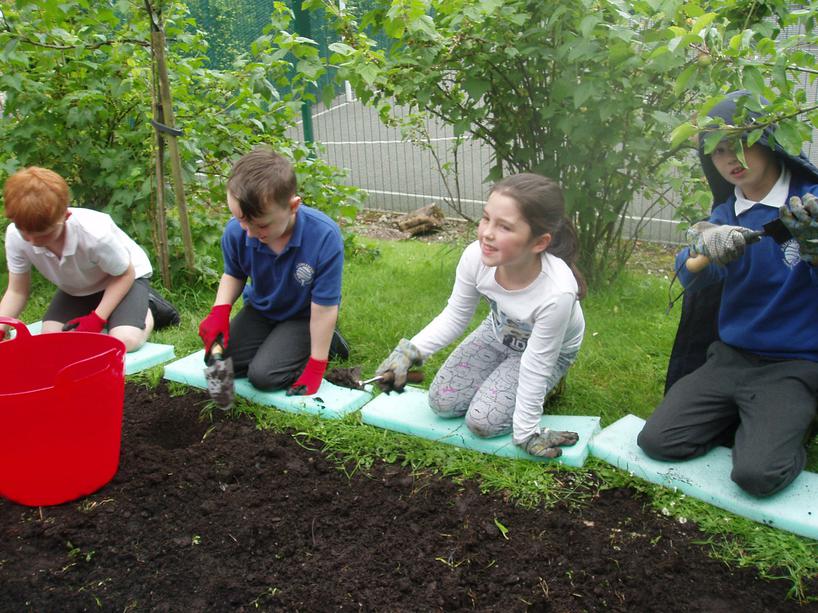 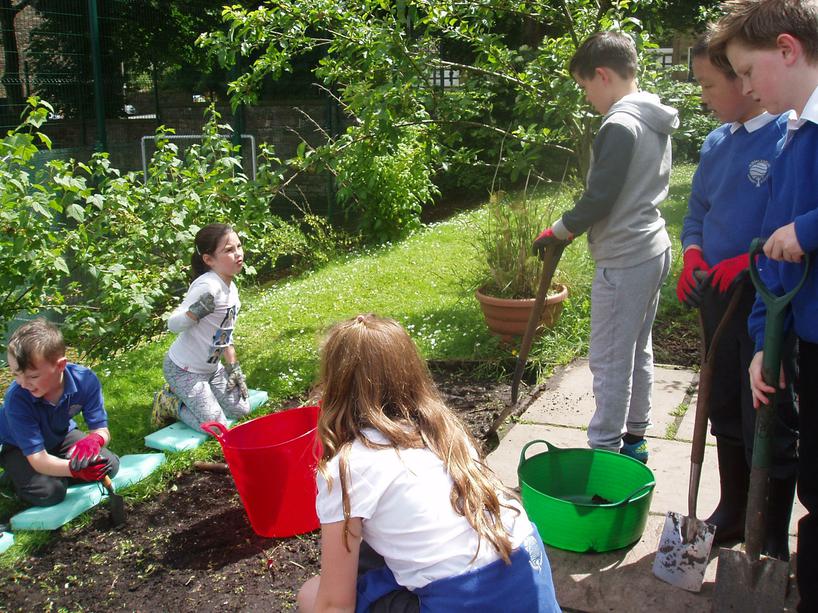 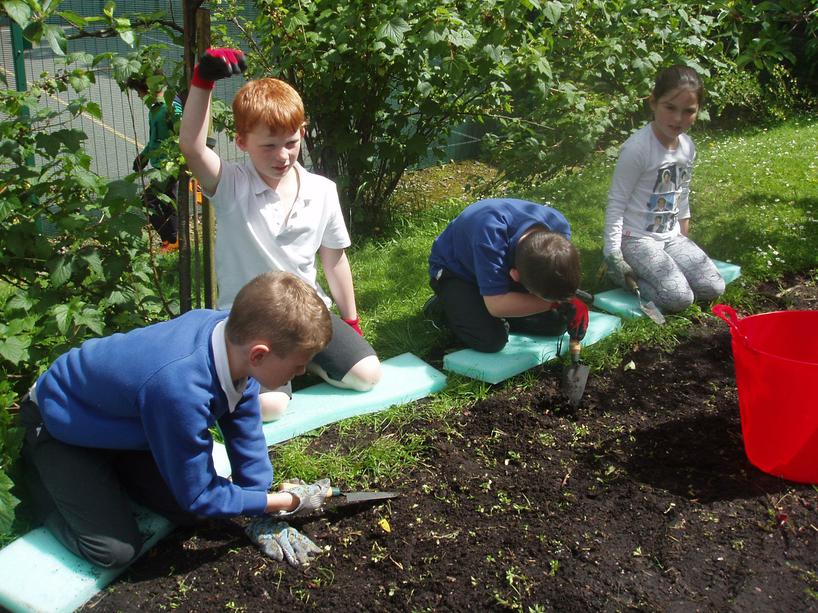 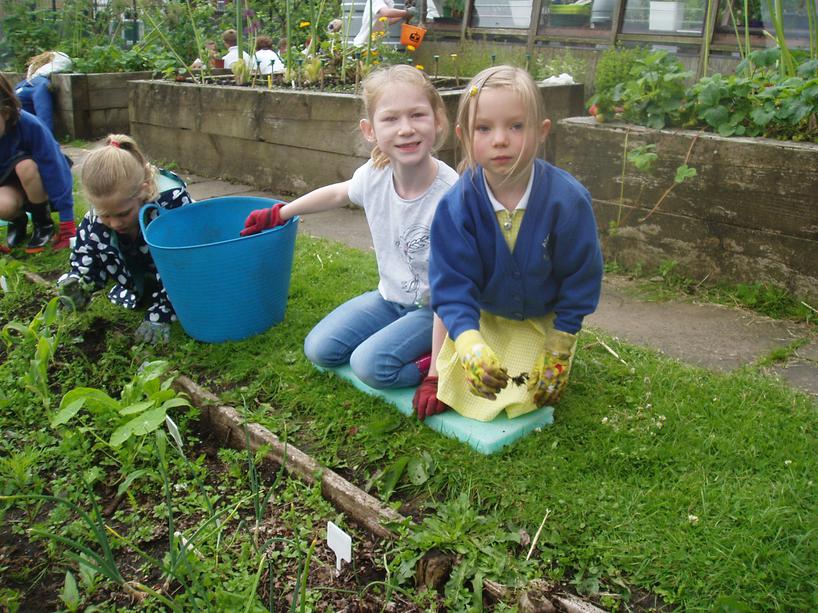 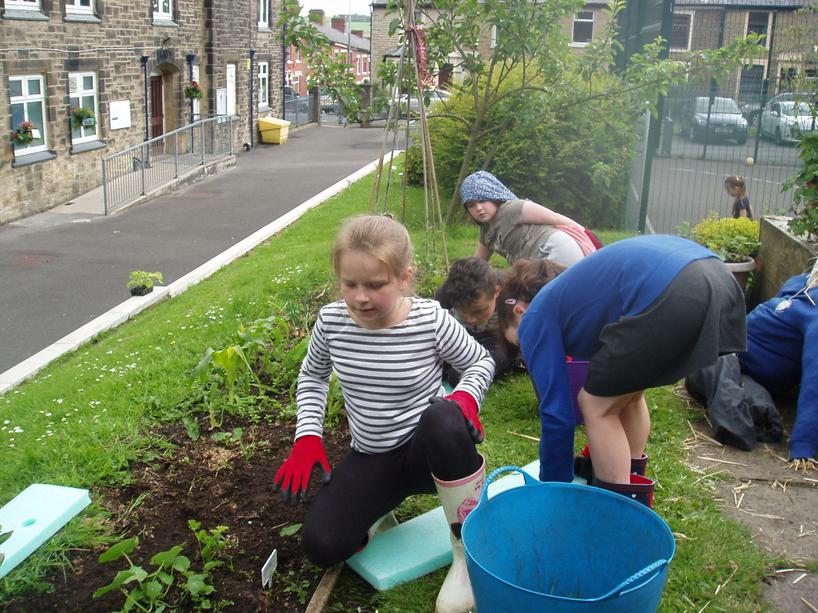 The new recycled kneeling pads proved to be very comfortable!

Mrs Solkar's children have been very busy in the garden creating flower pots containing Begonias for the four adopted War Graves in Darwen Cemetery. The children were split into their team groups and all had a turn at preparing and planting the pots.

As you can see they had lots of fun!

Mrs Davies kindly drove us to the cemetery where we placed a planter on each of the four adopted War Graves.

They have flowered all summer and look amazing on the freshly restored graves.

We had some plants left over so the children planted some pots to decorate the school garden.

As part of the  competition 'Whitehall in Bloom' the local councillors asked if the children from Ashleigh could be involved in planting bedding plants at the entrance to Whitehall Park. The Council donated £50 worth of plants to the three local schools which Mr Matthews kindly collected  from the Garden Centre.

The children carefully navigated the wheelbarrow full of plants, tools and gardening gloves to the entrance of Whitehall Park where they were met by the Councillors and spent the afternoon digging and planting.

The people using the Bowling Green were really pleased to see primary school children helping to improve their local environment and everyone commented on the children's gardening skills and how well behaved they were.

Well done to everyone who took part.

Reception Class have taken part in a competition from the Potato Council.

We were sent two varieties of potato, one called 'Rocket' and the other called 'Pentland Javelin' which we planted in containers. We had to water and earth up the potatoes until they were big enough to dig up.

The variety 'Rocket' gave us the heaviest crop and as you can see they tasted delicious at our potato picnic!!!

Here we are celebrating achieving the RHS Level 5 award for taking part in the Campaign for School Gardening.

Well done to everyone who helped in the school garden over the past 8 years.

Autumn Jobs in the garden

I used part of the prize money from the RHS Level 5 award to purchase two stone troughs. The children researched Alpine gardening and helped to design and plant the troughs.

As you can see they are very proud of the finished results.

The troughs now stand at the entrance to the Greenhouse.

Unfortunately not the ones with chocolate chips.

Some cookies are necessary in order to make this website function correctly. These are set by default and whilst you can block or delete them by changing your browser settings, some functionality such as being able to log in to the website will not work if you do this. The necessary cookies set on this website are as follows:

Cookies that are not necessary to make the website work, but which enable additional functionality, can also be set. By default these cookies are disabled, but you can choose to enable them below: